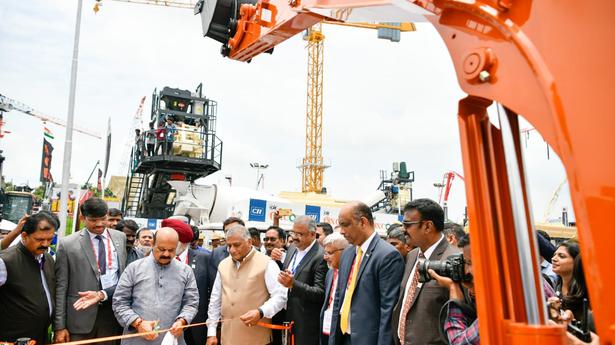 People at the bottom of the pyramid, real engines of the economy: Bommai

Industry should focus on automation, adoption of advanced technologies and use of alternative fuels: VK Singh

Industry should focus on automation, adoption of advanced technologies and use of alternative fuels: VK Singh

Inclusion of people at the bottom of the pyramid is essential as they are the real drivers of the economy, said Basavaraj Bommai, Chief Minister of Karnataka.

Inaugurating EXCON, South Asia’s largest construction equipment (CE) trade show organized by the Confederation of Indian Industry (CII) here on Tuesday, the CM said: “While our main focus is expected to grow so exponential in the country by advancing our technologies, the inclusion of people at the bottom of the pyramid is also critical since they are the engines of the economy.”

He urged the global captains of the CE sector gathered at the event to collaborate with communities at the bottom of the pyramid to foster the growth of the CE sector in particular and the economy in general. The EC sector is expected to contribute greatly to the country reaching its ambitious goal of $5 trillion in savings by 2025, the CM said. “The infrastructure sector is receiving an intense boost from the government, propelling India’s overall development and GDP. The policies announced by the Union government will ensure the creation, within a limited timeframe, of world-class infrastructure in the country.”

Speaking at EXCON, VK Singh, Union State Minister for Road Transport and Highways, said India was an emerging hub for construction equipment, outsourcing base components and the design basis.


“Private players in the construction industry need to focus on automation, adoption of advanced technologies and global best practices, use of alternative fuels and innovations in the use of waste as raw materials for their construction projects to reduce the cost of construction and the rate of pollution,” he added.

According to Singh, infrastructure must be sustainable and industry should take steps to improve quality at an affordable life-cycle cost. “We are working hard on hydrogen technology and solar energy because we see it as the future of the country. The CE industry should be prepared for the competitive market situation and focus on Industry 4.0 to reorganize,” he urged.

Attending the event, Deepak Shetty, Chairman of CII EXCON, said, “India must become less dependent on imports to build large-scale infrastructure projects, roads and ports. The development and adoption of technology is essential for us to become a global export hub. We will be able to accelerate if we identify new drivers of growth, understand the importance of the rural economy and organize a roadmap for alternative fuels.”

Women in the CE sector have been recognized and awarded the Women Building India Awards. Women’s champions from Cummins India, Volvo CE India, Schwing Stetter India and L&T Constructions & Mining Machinery were recognized for their contributions.